In the West, they call it "The License"

The recent years witnessed an evolution in terms of "don't drink and drive" awareness in Lebanon. The biggest credit goes to KunHadi, a non-profit Lebanese organization, which mission is to introduce a new driving culture among the youth generation. Nevertheless, the ratio of car accidents per year is still high in the country and the generated tally worrisome. 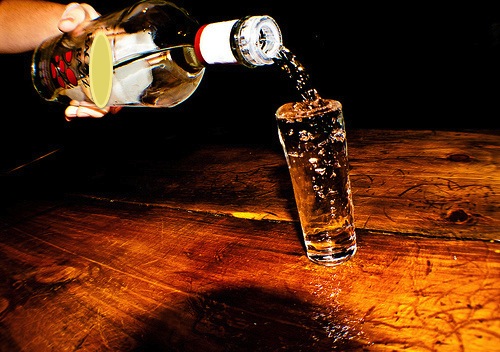 I still recall our nights out during my teenage years. Those nights were true feasts and always required warm up sessions. So, we used to gather at a friend's house around 7:00 pm, shake few cocktails, get introduced to the fresh faces that decided to join the group, and share some pre-party innocent laughters prior to hitting the nightlife scene. On several occasions, we had returned home with one or two of our comrades totally drunk and wasted. Indeed, I used to be that comrade on not a few occasions. It was never an intention to go binge drinking but rather a "serving" mistake masterminded by Mr. Bartender.

At 18, I started bartending myself. It was a complementary job that helped me keeping few dollars in my pocket until graduation. It was as well a convenient manner to have fun, consume few drinks, and enjoy the nightlife scene while being paid instead of being billed. Nevertheless, I fell in love with my new profession and, as a hospitality management sudent, decided to adopt it as a career.

Few years later, I decided to attend a bartending school. I was very excited to finally have in hands the knowledge of a breath-taking world called "spirits". What I did not realize is that this same course would open my eyes to the many serial killers that we keep behind our bars and the fiasco of the business. Don't be surprised, they are serial killers in absentia.

The pharmacy next door

Let's say they just informed you that the pharmacy next door was shut down by the concerned investigative authorities because it was found that the alleged pharmacists are indeed unlicensed to practice the profession. What would be your reaction, especially if you had trusted those pharmacists so much to allow them picking up the adequate drugs for your diverse diceases for the last five years? In case such possibility is alreday disturbing then we are half way towards unveiling the serial killers in absentia.

During the 14th and 15th centuries, pharmacies were stocked with basic items you find on every bar today, with one slight difference: at that time, they called him the chemist or medical practitioner but now we tag him "Mr. Bartender". In plain English, the spirits we consume today on a night out - the booze, as slang lovers like to call it - are indeed the drugs of yesterdays. Hence, you do have the right, as a consumer, to be served ethically in a way that preserves rather than damage your health on the long run. As a consumer, you do have the right to be banned from consuming alcohol in general or a given type, if "Mr. Bartender" concluded that the ratio of toxication in your blood is high (red customer) or the order type of alcohol does not match with what you were consuming earlier.

Mr. Bartender is a serial killer

In order for Mr. Bartender to judge wisely on what has been approached above, he/she must be knowlegeable of the profession, its ethos, and the brands at the reach of his/her hands. For such, the "Big Wild West" implemented the licenseship methodology whereas every person who wished to jump behind a bar should have passed a "test of skills" first in order to avoid being tagged as another newborn serial killer.

I know the description can be perceived as a harsh one, but let's think about it a bit. Health damage, as a result of abusive concumption of alcohol or an indiscriminate one, does not occur immediatly but after years of irresponsible drinking ritutal. In parallel, some combinations of different types of alcohol give effect few minutes later, giving the consumer enough time to start steering the wheel while he/she thinks that they are still sober.

>> Dear consumer, kindly forget soberness from the time you hold your first cup and keep you calculator back home because counting the percentage of alcohol in your blood will give you burden and hamper your socializing experience. Please, give the keys to a non-drinker or simply buy yourself and people around you a favour and book a cab.

>> Dear Mr. Bartender, kindly freeze your nightlife trilogies until acquiring the necessary education. Remember that a serial killer can be serving a loved one at the next bar while you're carrying on with your slaughterbar adventure.

>> Dear concerned Ministers and Senior Officials, where are the LICENSES?