Inking an Iraqi deja-vu over Syria 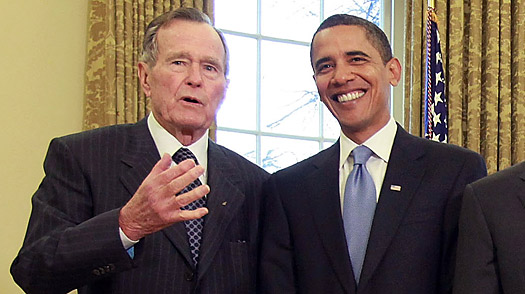 After an Indonesian rendezvous with his Russian counterpart, US Secretary of State, John Kerry avowed that the process of stripping Syria of its chemical weapons "has begun in record time", expressed "appreciative" tone for Moscow's initiative - and of course cooperation, and felt obliged to give "credit to the Assad regime, frankly"! After all, the US administration had always welcomed "a good beginning" in the Arab World.

Mr. Kerry's short statement irked evermore a Syrian armed opposition and an overseas transitional government, which have developed growing sentiments of isolation since Washington and its allies seceded, one after another, striking military targets in Syria. Although such drastic change in stances was already underpinned by President Barack Obama, who predicted some month ago a breakthrough in case Mr. Putin's initiative was respected, no major player was pampering Mr. Assad with another "good beginning" to the least.

This Indonesian parody brought back to the Arab conscious the utterance of another US diplomat, Mr. James Jeffrey, who publicly noted, while being ambassador to Iraq in November 2011, the United States of America's apologies from Iraqi Shiites for abandoning them during their 1991 uprising against Saddam Hussein's regime.

In fact, Mr. George H.W. Bush, who was the patrician of the White House in 1991, fuelled Iraqi Shiites, via a speech broadcasted by "Voice of America", to "take matters into their own hands and force Saddam Hussein, the dictator, to step aside". From Abu Al-Khasib and Al-Zubayr in south Basra - where the rebellion first erupted - up to Al-Sulaymaniyyah in autonomous Kurdistan region, both Shiites and Kurds led a revolt that conquered tremendous achievements in a spectrum of two weeks. Even General Norman Schwarzkopf, who was the US Commander-in-Chief leading all coalition forces in the Persian Gulf War, warned Saddam Hussein at that time, "You fly, you die". Nevertheless, the Iraqi helicopter gunships bombed Shiite rebels, the uprising was quenched, and Mr. Bush's enthusiasm was said to be misquoted.

If it turned out that Mr. Bush was not misquoted in 1991, the Syrian opposition hopes that frankly crediting a regime, one month after being globally condemned, will be considered as a "misplacement" by Washington in the upcoming months.

Since his first inauguration as president in 2009, Mr. Obama vowed distinction from his predecessor by bringing the troops back home and shift the concentration of US foreign policy off the Middle East. Whilst the last US troops withdrew from Iraq in December 2011 and a deployment of US Navy vessels from the Arabian Sea to Far East Asian waters occurred the following year, the US administration still feel casked within the Arab World stratagem, especially after the spouting of the Arab Spring. But could a new beginning with Syria and another similar openness to Tehran help evade a geographic zone that is becoming too troublesome to handle?

Mr. Kerry did not elaborate much on the looming new beginning in Syria and if he envisages the hereafter Damascene scenery with or without President Bashar Al-Assad. This foggy portrait is leaving the Free Syrian Army's (FSA) command frustrated more than at a time when it is no longer fighting on singular frontline. The surmounting military capabilities and sectarian-fuming hostilities of Jibhat Al-Nusra had pushed the paramilitary FSA to consider restoring areas under the underscored radical Islamic armed movement as high a priority as to seize territories under the official Syrian army's control.

It took the U.S. twelve years to rectify a 1991 mistake in Iraq and twenty years to admit it. Hopefully, it won't take that long in Syria!