The 70th anniversary of independence in Lebanon ... What have changed? 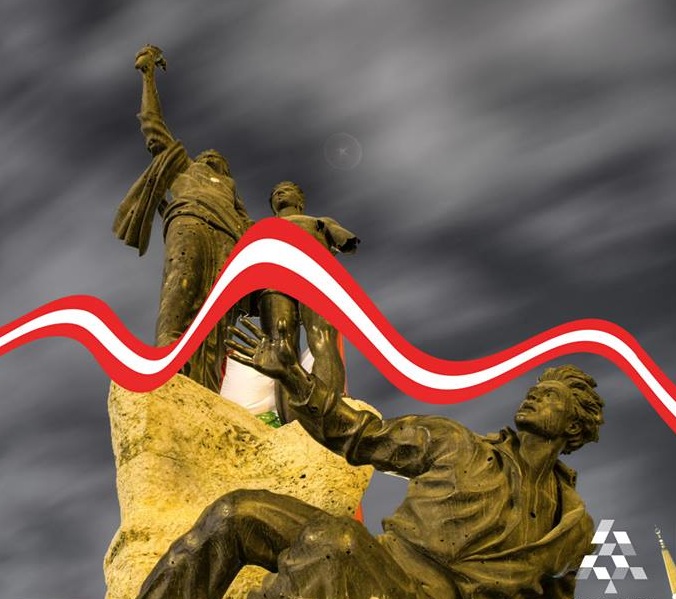 This year, the giant internet search engine, google, celebrated Lebanon’s independence by posting a doodle featuring Al-Raoucheh Rock on both its local and global homepages. Yet, “22 November” remains an anecdote for most Lebanese residing the homeland or still attached to the domestic political sphere.
Barcelona, 23 November 2013
It has been three years now since I got recruited by a foreign organization for an overseas’ job. Every year or so, I receive a new assignment in a different country, hence I repack my belongings and a shattered memoir, pass by my hometown on a swift journey, and fly to my nth work-duty destination. Despite being categorized as an expatriate - at least, as per the Lebanese banking sector standards, it has never crossed my mind to inform the Lebanese embassy or consulate about my whereabouts. Call it a misjudgment, but I had never sensed the added-value from such initiative.
While plunged into my “to-do” list in my office last week, I received an invitation letter bearing a diplomatic insignia. It was an invitation from the Lebanese embassy to attend a gala dinner in celebration of the 70th anniversary of independence.
Indeed, this invitation letter threw me back towards my high school’s playground, 21 November 1995. On that day, the administration summoned all classes for a short Independence ceremony. The cold breeze of the early morning was slapping our faces mercilessly as we went on chanting the national anthem. We were all as serious as newly conscripted soldiers, holding our heads high underneath the eyes of an uninvited visitor standing on a portable mini-stage next to the school’s director brought for the occasion.
The unexpected visitor was none but the Minister of Education at that time, who, as quoted by him, “wanted to check on Lebanon’s offsprings on that glorious day”. As the minister finished his speech a short old man joined him to wave us a salute. A student standing behind me gossiped, “I saw the short man on television yesterday ... he is a Syrian diplomat!” I did not disregard my friend’s claim on that day, especially that two weeks earlier we, the students, participated in a sit-in in front of the parliament to call “Syria Out!”.
After all Syrian troops departed Lebanese soil in 2005, I was outspokenly cheerful for foreseeing the irrevocable opportunity of celebrating, for the first time, an “Independence Day” in an independent Lebanon. Unfortunately, my glee turned into misfortune as we all stood, arms crossed, watching one prominent figure after another falling like dominos under the grip of a fatal wave of targeted assassinations.
With the assassination of Captain Wissam Eid, a senior terrorism investigator at the Lebanese General Security Directorate, on 25 January 2008, Lebanon had so far lost nine of its high-profile seniors in a span of approximately three years. While the Lebanese were recuperating their breath, after the tagged killing, a climaxed dispute between the Government of Lebanon at that time and the opposition pushed Hezbollah, on 7 May 2008, to stage a mini civil war down the alleys of what used to be called “West Beirut”. The scenery of death resumed thereafter with the liquidation of Saleh Aridhi, a pro-Syrian Druze politician affiliated with the Lebanese Democratic Party.
Although no foreign troops were found on Lebanese soil since the 2005 withdrawal of Syrian army, to the exempt of the UN Peacekeeping Forces in the South, the series of targeted assassinations portrayed Lebanon as a fragile state still under the clandestine tutelage of diverse regional and international players.
In 2010, the “Arab Spring” typhoon hit the Tunisian shores and spilled over to almost every Arab country, regardless of being - temporarily - contained in Morocco, Algeria, Sudan (let’s skip Darfur for the moment), Saudi Arabia, Jordan, and apparently Bahrain.The notion of “independence” broiled in Lebanon and elsewhere in the Arab World as the credibility of our forefathers, who negotiated the end of foreign tutelage under the mandate’s era, was phonetically put into question.
“Independence cannot be established if Lebanese parties or groups decide to be independent from the logic of the state ... We cannot talk about independence if the state fails to spread its sole authority over all national territory”. President Michel Suleiman’s quote, from his broadcasted speech on the eve of Independence Day, confirmed the acuteness of Lebanese citizens’ corrosion with their independence.
The recent twin bombings nearby the Iranian embassy in Beirut did not only preclude Lebanese from enjoying their Independence Day feasts but has also highlighted on the inevitable fate of every stateless state. Although the absence of a coherent governmental role favor domestic nepotism and the rise of statelets, it does also open doors for imported religious and ideological radicalism. For those who had the chance to spend at least a week in Iraq post 2003, a twin-bombing explosion, with few minutes timeframe difference between the first and second blast, is a signature technique in the conduct of hostilities in the Middle East. Mr. Nabih Berri, the Lebanese Speaker of Parliament, was not posting a political stance when he warned from “a dangerous scheme aimed at making Lebanon another Iraq”.