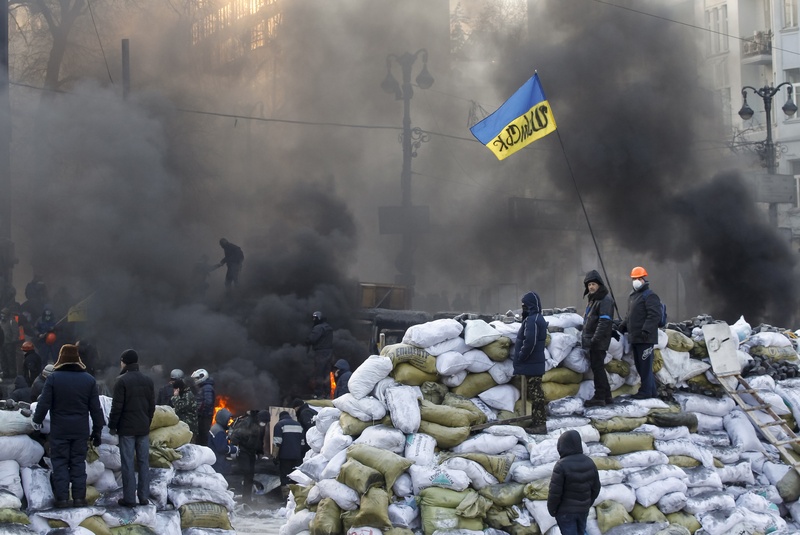 The recent unrests in Ukraine do not resemble the “Orange Revolution”, which brought Victor Yuchenko to power on 23 January, 2005. Indeed, the last anti-government protests, that conquered Kiev since early 2014 and resulted in bloody clashes with the anti-riot police, were alarming especially that they were triggered by Mr. Yuchenko’s rejection for accession of his country to the European Union (EU) after striking a deal with Moscow.
Aden, March 11 2014
Once in office, President Victor Yuchenko put aside the ideals of the Ukrainian youngsters’ revolt and manipulated a campaign of intimidation and arrests against his political adversaries. His quasi Soviet-style ruling imposed an irreparable social schism between those longing for the glories of “Mother Russia” in the eastern and southern part of the country and others longing for a Ukraine closer to the EU rather than been caught under the fist of Mr. Vladimir Putin.
The roots of the Ukrainian crisis were mostly reflected on 23 February, 2014, when Simferopol hosted a Euro-maiden rally in support of a new Ukrainian regime while Sevastopol called Moscow to rescue the Russian minorities residing it. Two days after, a sit-in next to the Crimean Parliament pled for a referendum on the independence of Crimea. Based on the Partition Treaty on the Status and Conditions of the Black Sea Fleet, which was signed between Russia and Ukraine in 1997, and Sergey Askionov’s, the de facto Crimean Prime Minister, urge for a Muscovite intervention, the Federation Council granted Mr. Putin permission, on 1 March 2014, to deploy Russian military troops in Ukraine.
Such rapid evolvement of events in Ukraine reminded the U.S. Administration of the Cold War upheavals and portrayed nostalgia, in the lands of the tsars, to revive the ordeals of the Socialist Soviet era. Mr. Barack Obama, the U.S. President, did not overpass yet Russia’s successive vetoes at the U.N. Security Council over the crisis in Syria. On another note, the White House is still struggling to clean his slate vis-à-vis his allies in Europe and the region over Washington’s refrain from launching air strikes on military targets in “Al-Assad Land”, preferring to fall for another Russian diplomatic maneuver.
U.S. Secretary of State, John Kerry, and his Russian counterpart, Sergei Lavrov, have headed to the United Kingdom for bilateral talks in hope to de-buckle the escalating tension in Ukraine and Crimea. While the underlined meeting is considered the last channel to prevent the advent of a ravaging storm, William Hague, the U.K. Foreign Secretary, described the situation as a “formidably difficult task”.
The “White Bear” seemed to be back on track despite the dissatisfaction of many policymaking capitals in Europe and America. Mr. Vladimir Putin has so far managed to crush on any domestic threat from his political adversaries while concerting diplomatic and economic relationships with under-developed nations in the Middle East, Asia and Africa. The acceptance of Tehran, under President Hassan Rouhani, to rejoin the negotiations-table over its nuclear file, Turkey’s palpitation over its internal political deadlocks, and the U.S. fiasco to fine-tune alliances with the new regimes in the Arab World, mostly in Egypt and Libya, are fomenting a new influential Russia presence on the regional geo-political map.