Turkey's Erdogan between allies and foes 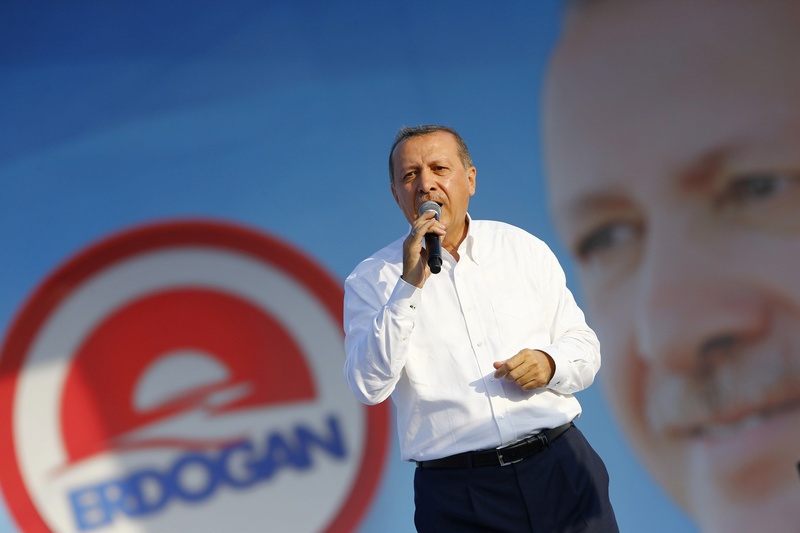 Despite the crackdown on the Muslim Brotherhood in countries such as Egypt and Yemen, where the movement has entrenched grassroots of affiliates and supporters, the Turkish “Justice and Development” Party - AK succeeded to win 51.79% of the votes, during the presidential elections held on 10 August 2014. This was the first presidential elections during which the people, rather then their parliamentary representatives, were the ones eligible to vote in accordance with the 2007 “constitutional referendum.

An approximate 28.5 million Turkish citizens preferred having the incumbent Prime Minister, Recep Tayyib Erdogan, at the presidential office, caring less about the latter’s claimed murky political and economic manoeuvres, which reached a climax during the 2013-2014 “Gezi Park” protests. While some refer to the underlined protests as a cornerstone towards free expression of the people’s will in a country where secularism and democracy are none but trading points on Ankara’s foreign affairs agenda, others accuse regional and international players of meddling into the country’s internal affairs in order to weakening the system from within and undermine the achievements realised by AK.

Regardless of who’s right and who’s wrong, the outcome of the recent presidential elections confirmed that Turkish citizens are still not prepared to evade social conservatism, as long as it preserves a balance between politico-religious practices and communal secular lifestyle. Indeed, such sentiment has not surfaced out of the blue. On one hand, the regional turmoil, accompanied by a popular denouncement vis-a-vis radical Islamic movements such as ISIS and Jubhat Al-Nusrah, had entrapped Turkish citizens in constant fear from being pulled, even if unintentionally, into a deadly quagmire, which has reached the southern borders. On the other hand, the continuous influx of refugees from Syria and Iraq threaten to create disparities within the Turkish social fabric and awake anew ethnic rivalries especially by the Kurdish component.

Saying so, Turkey’s worst nightmares might not be triggered solely by external factors but rather could be provoked via an internal constituent: the military institution. Until 1980, the Turkish nation had witnessed four successful coups. The series of assassinations and coordinated attacks, which occurred between 24 January and 4 November 1993, were flagged by some analysts as “camouflaged military coup executed by elements of the Turkish military via covert means”. The military memorandum of 1997 indicted the ousting Prime Minister Necmettin Erbakan from office and the end of the coalition government, thus reminding Turks of the far-reach influence of the military institution on the political platform. Operations “Sledgehammer” and “Cage Action Plan”, dating back to 2003 and 2009 respectively, did not help to minimise the Turkish citizens’ frustrations and disgruntlement from being forced, abruptly, into a junta order.

Throughout his tenure as prime minister, Mr. Erdogan played the role of the authoritarian, the economic revolutionary, the social liberties garrison, and the intolerable manipulator. Nevertheless, he succeeded to spearhead economic growth and political reforms, promoting Turkey to be the 17th largest economy in the world and in line with the European Union’s model. In September 2013, the U.S. President Barack Obama shocked many of his allies by stating that Washington will refrain from carrying aerial operations against military targets in Syria. The underlined announcement, followed by the revitalisation of U.S. - Iranian dialogue over Tehran’s nuclear program, pushed Mr. Erdogan to step back, in his confrontational stances in regard to Al-Assad regime in Syria, and concentrate on preventing the emergence of radical Islamic activities on Turkish soil.

Mr. Obama’s speech was the second blow to Erdogan’s strategic political approach in the Middle East region, following the “July 2013” counter-revolution in Egypt, which resulted in the arrest of President Mohammad Morsi and the classification of the Muslim Brotherhood as a terrorist movement.

The growing discontent from the Muslim Brotherhood’s misruling in Egypt caused a strife amongst the Arab Gulf states where the Kingdom of Saudi Arabia, Bahrain and the United Arab Emirates withdrew their ambassadors from Doha in March 2013. Accordingly, Qatar was forced to inform seven leading figures of the Egyptian Muslim Brotherhood branch, including Amr Darraj and Mahmoud Hussein, that they should “leave within a week” the Qatari capital.

As quoted by Andrew Hammond, a member of the European Council on Foreign Relations, “rather than making sweeping policy changes, the side-lined state - Qatar - is making incremental concessions to placate its neighbours”. Concurrently, Qatar’s determination has further isolated Turkey from the Arab World and emphasised a precarious role for Ankara in the newly announced war on terror, or ISIL, as initiated, once again, by the U.S. administration.